A day out (and a solar eclipse) at Maynooth University

I  had a most enjoyable day on Friday at the mathematical physics department of Maynooth University, or NUI Maynooth, to give it its proper title. I was there to attend an international masterclass in particle physics. This project, a few years old, is a superb science outreach initiative associated with CERN, the European Centre for Particle Physics particle in Geneva, home of the famous Large Hadron Collider (LHC). If you live on planet earth, you will probably have heard that a famous particle known as the Higgs boson was recently discovered at the LHC. The idea behind the masterclasses is to give secondary school students the opportunity to “become a particle physicists for a day” by performing measurements on real data from CERN. 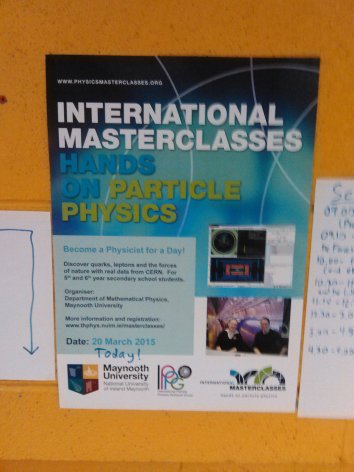 The day got off to a great start with a lecture on “Quarks, leptons and the forces of nature” by Dr. Paul Watts, a theoretical physicist at Maynooth. An excellent introduction to the world pf particle physics, I was amused by Paul’s cautious answer to a question on the chances of finding supersymmetric particles at the LHC. What the students didn’t know was that Paul studied under the late Bruno Zumino, a world expert on supersymmetry, and one of the pioneers of the theory. Paul’s seminar was followed by another lecture, “Particle Physics Experiments and the Little Bang” , an excellent a talk on the detection of particles at the LHC by Dr Jonivar Skullerud, another physicist at Maynooth. In between the two lectures. we all trooped outside in the hope of seeing something of today’s solar eclipse . I was not hopeful, given that the sky was heavily overcast until about 9.30. Lo and behold, the skies cleared in time and we all got a ringside view of the event through glasses supplied by Maynooth physics department! Now that’s how you impress visitors to the college… 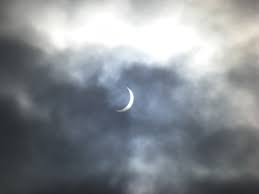 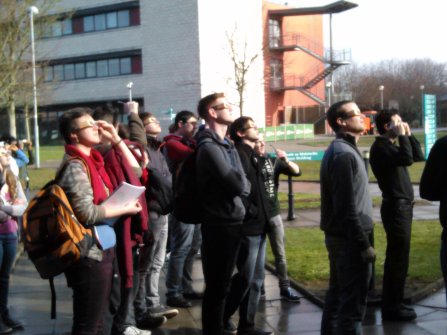 After lunch we had the workshop proper. Each student was assigned a computer on which software had been installed that allowed them to analyse particle events from the ALICE detector at the LHC (lead ion collisions). Basically, the program allowed the students to measure the momentum and energy of decay products of particles from the tracks produced in collisions, allowing them to calculate the mass of the parent particle and thus identify it. As so often, I was impressed how quickly the students got the hang of the program – having missed the introduction thanks to a meeting, I was by far the slowest in the room. We all then submitted our results, only to find a large discrepancy between the total number of particles we detected and the number predicted by theory! We then all returned to the conference room, and uploaded our results to the control room at the LHC. It was fun comparing our data live with other groups around Europe and discussing the results. Much hilarity greeted the fact that many of the other groups got very different results, and the explanation for that (but what many groups really wanted to know was  whether we got a good look at the eclipse in Ireland). 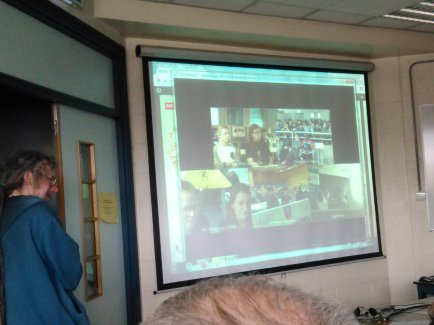 Uploading our results via a conference call with the contol room at the LHC, CERN

All in all, a wonderful way for students to get a glimpse of life in the world of the LHC, to meet active particle physics researchers, and to link up with students from other countries. See here for the day’s program.