A Night at the Academy Awards

I spent a most enjoyable evening last week at the Royal Irish Academy. Ireland’s premier learned society, the Academy is an all-Ireland body that promotes excellence in the sciences and the humanities, fostering links between ‘the two cultures’. Membership of the Academy is considered a high honour amongst Ireland’s academics, and former members include eminent Irish intellectuals such as William Rowan Hamilton,  Ernest Walton, Seamus Heaney and W.B. Yeats.

I was there to witness the awarding of this year’s  RIA Gold Medals for outstanding research. The medals were presented to Professor Werner Nahm, for his seminal work in theoretical physics and to Professor Desmond Clarke, for his research in the history and philosophy of science in the 17th century.  I was pleased but not surprised at Werner’s award; his research has already been recognized with  several international prizes, not least the famous Planck Medal of the German Physical Society. As Director as the School of Theoretical Physics at the Dublin Institute for Advanced Studies (DIAS), Werner plays a key role in mathematics and physics in Ireland. (He also has a side interest in the history of science, and was one of the first people I turned to in our studies of unpublished Einstein manuscripts. In fact, Werner recently showed me a hardcopy of a little-known book at DIAS by Albert Einstein, published only in French, with annotation in the margins by the late Eamonn de Valera – all very much in keeping with the interdisciplinary spirit of the Academy!)

The main conference hall at the Royal Irish Academy 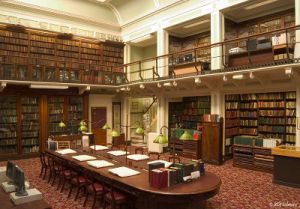 The library at the Royal Irish Academy

The evening was most enjoyable, with erudite professors of science and the humanities intermingling in the Academy’s beautiful premises on Dawson Street in Dublin – indeed part of the remit of the Academy is the promotion of links between the two disciplines. The ceremony included speeches from Jan O’ Sullivan , our Minister for Education, and  Tom Boland, director of the Higher Education Authority.

One surprise was that the event did not include acceptance speeches by the awardees. This seemed strange, given the prestige of the RIA medals (imagine a Nobel award without the speech). One would have liked to hear the recipients describe their research, thank colleagues, and comment on the challenges of academia. In particular, I thought it was a pity that there was no opportunity for two highly distinguished academics to respond to the speeches of the Minister for Education or the Director of the HEA. For example, I suspect Werner would have liked to comment on the current lack of funding for research in basic science and its impact on the study of mathematics and theoretical physics in Ireland (and on his Institute).  I have never met Professor Clarke, but it would have been most interesting to hear his views on the challenges faced by historians in Ireland.

All in all, a most enjoyable occasion. I was disappointed that the event attracted almost no media coverage afterwards, despite the presence of several press photographers on the night. Perhaps the occasion was deemed too intellectual by news editors –  what is a lifetime’s achievement in academia compared with latest adventures of Roy Keane…

There is a short article describing the event in the Weekend section of The Irish Times. However, it’s easy to miss as there are no  photographs and there doesn’t seem to be an online version.

One response to “A Night at the Academy Awards”