I spent last weekend at a most enjoyable summer school in honour of Robert Boyle, the Waterford-born Anglo Irish aristocrat who became a major figure in the English scientific revolution. Boyle was extremely well-known in his day for his scientific discoveries, his role in the Royal Society and his discussions on the usefulness of the new scientific method (if he is less well-known today, it may be because his contributions were later eclipsed by the groundbreaking advances of his contemporary, the genius Isaac Newton). 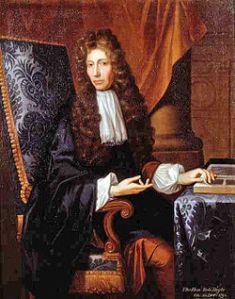 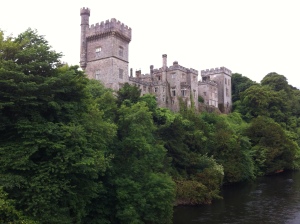 The summer school took place from Thursday 4th to Sunday 7th of July in the Heritage Centre in Lismore, the beautiful town that is the home of Lismore Castle where Boyle was born.  The talks covered a wide range of topics, from the history and philosophy of the scientific revolution to Boyle’s own life and were of huge interest to anyone with an interest in history, science or indeed the history of science.  It was the sort of conference I like best – a small number of inter-disciplinary talks aimed at curious academics and the public alike, with lots of time for questions and long breaks for discussion. Other highlights were an open-air barbecue in Lismore Castle on Friday evening, a re-enactment in costume of some famous Boyle experiments and a tour around the famous Lismore Castle Gardens. 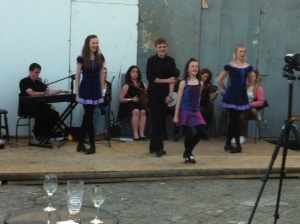 Song and dance in the grounds of Lismore Castle

The festival proper started with a lecture on Thursday evening by Jim Malone, the Robert Boyle professor of medical physics at Trinity College Dublin:  ‘Robert Boyle: Getting to Know the Man from Lismore’. This was a general overview of Ireland’s most famous scientist, from Boyle’s early years in Ireland to his travels in Europe in 1639-45, from the rise of the Royal Society in England to Boyle’s prolific work at Oxford in the period 1655-1668. It was a very appropriate introduction to Boyle’s great contributions to science, medicine, philosophy and theology and there were also many biographical details I hadn’t heard before, not least the astonishing number of awards and honours he turned down – clearly not a scientist motivated by fame or fortune. You can find more on Jim and his lecture on the conference website here. 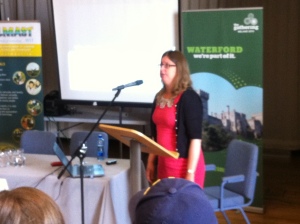 On Friday morning, Dr Anna-Marie Roos of the University of Lincoln laid out the historical context of Boyle’s work in more detail in her lecture ‘Robert Boyle and Early Modern English Science’. Starting with the work of Sir Francis Bacon, she described the emergence of a new questioning of the wisdom of the ancient Greeks, a new philosophy propagated by the invisible college. She then went on to describe Boyle’s experimentation in the context of complementary investigations by colleagues such as Hooke, Wren and Halley. This talk established a detailed social context for Boyle’s investigations very carefully without in any way detracting from the great work he did. You can find more on Anna-Marie and her lecture on the conference website here. 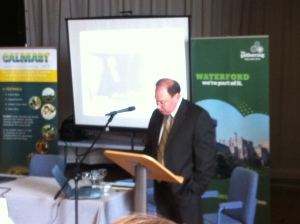 In the afternoon, Dr Bill Eaton of Georgia Southern University gave the talk ”Boyle in Ireland; Medicine and the Mechanical Philosophy’ where he made a very interesting point on Boyle’s philosophy of science. It turns out that although Boyle spent very little time in Ireland, he did some work on dissection of animal and human cadavers with William Petty in the period 1652 to 1654 in Ireland, experiments that played a very important part in the development of his philosophy of science. Thus, while we associate Boyle’s  scientific work with his later years at Oxford, it is likely that his earlier studies in anatomy in Ireland probably played an important role in in his development as a scientist, particularly in his belief in experimentation to judge the rightness or wrongness of a hypothesis. More on Bill and his lecture here.

Song and dance at the castle barbecue

I had a sore head after the open-air barbecue at Lismore Castle on Saturday morning, but not so sore that I didn’t enjoy the superb lecture ‘For the Glory of God and For the Relief of Man’s Estate’ by Dr Allan Chapman of the University of Oxford. In many ways, this was the perfect sequel to Anna Marie’s earlier talk on historical context (see above), I never tire of Allan’s unique coupling of a huge breadth of historical knowledge with an ability to communicate key historical points in clear, simple language. To pick one important theme, Professor Chapman was at pains to trace the rise of the new philosophy to a number of earlier advances in the 15th and 16th century; from geography (the voyages to the Americas proved Aristotle wrong on many counts) to anatomy (animal dissections showed the ancients to be equally wrong on the innards of living species), from herbal medicine (tried and tested herbal remedies were far superior to ‘cures’ from ancient books) to the discovery of the invisible force of magnetism. It set Boyle’s investigations in a yet wider context and I was particularly struck by Allan’s insight that to Boyle and his colleagues, new instruments such as the microscope were very much the equivalent of new ships for the previous century’s explorers. Another great theme was Allan’s careful analysis of Boyle’s motivation, that each experiment was driven by his dual passion of investigating God’s creation and relieving the suffering of man. Allan analysed the latter in detail, explaining how Boyle and his contemporaries expected the new investigations to help combat the ever-present threat of famine. You can find more on Allan and his lecture on the conference website here.

Professor Chapman’s discussion of Boyle’s concern for the relief of man’s estate set the stage nicely for a more contemporary talk, ‘Plants for the 21st Century’, by Professor Liam Dolan of Oxford University. This was yet another tour-de-force: starting with some astonishing diagrams of plants by Boyle’s contemprary Robert Hooke, Liam went on to describe groundbreaking research in botany today, not least the use of modern genetics to meet the challenge of feeding the world’s growing population in the face of climate change. This was an overview of current attempts to modify plant genes in order to improve the resistance of crucial crops to disaster, for example the synthesis of a new strain of rice that can survive widespread and frequent flooding in Bangladesh. Similar efforts are ongoing to synthesis crops that can survive prolonged drought, a likely consequence of climate change in other parts of the world. It was a superb introduction to the fraught topic of genetic modification and it fitted very well with Boyle’s concern for the  ‘relief of man’s estate’. You can find more on Liam and his lecture here.

All in all, a superb conference in a beautiful setting. There were several other great talks, not least a discussion of Boyle’s contemporary Valentine Greatrakes  by Dr Peter Elmer and a superb talk on ageing and dementia by Professor Ian Roberston. Ireland is home to a great many excellent summer schools on literary figures and traditional musicians, but none on scientists; I suspect this festival will become be a major event in the Irish summer calender in a few years.

Filed under History and philosophy of science, Science and society, Uncategorized

Tagged as History and philosophy of science, Science and society, university professors