Yesterday was the last day of the  Cosmology and Quantum Foundations  conference, a symposium that formed part of the  Establishing the Philosophy of Cosmology project at Cambridge and Oxford.

There was no workshop in the  morning, but there were two weighty lectures in the afternoon, ‘Inflationary Cosmology as a Laboratory for Primordial Quantum Mechanics’ by Antony Valentini and ‘Relational Quantum Mechanics: Spinfoam Cosmology’  by Carlo Rovelli.

Antony Valentini’s talk was the second installment of his thesis that we should consider the possibility that the quantum equilibrium universe we experience is simply a subset of a much larger ensemble which is deterministic, not in equilibrium, and does not obey the standard rules of quantum probability. In this model, elements of the larger ensemble made a transition  by a process of relaxation on atomic timescales to the quantum equilibrium we see today. Antony hypothesized that observational cosmology might offer a test for his model because any non-equilibrium states remaining before cosmic inflation would have become frozen during this period,  feeding into the cosmic microwave background at the end of inflation. His analysis suggested one explanation for the well-known power deficit in the CMB at long wavelengths in the Planck and WMAP data.  I have no idea what the theoreticians thought of Antony’s hypothesis, but talks like this certainly give the lie to those who accuse physicists of groupthink and of being incapable of thinking outside the box!

Carlo Rovelli then gave the second installment of his talk on his relational view of quantum mechanics (see last post). The main point here was that adding gravity to the analysis is not a complication in the case of the relational interpretation of qt because the model is fundamentally relativistic in nature (gravity is simply a curvature of spacetime in relativity). He went on to describe how the theory leads to the ‘quantum loop’ view of quantum gravity. I am not qualified to comment on the theory, but what I took out of Carlo’s talks is that the only fundamental entities in relational theory are covariant quantum fields -the wavefunction has no physical significance, any more than a mathematical operator.

All this was followed by a round table discussion between, Carlo, Antony, Simon Saunders and David Wallace. For many of us, this was a major highlight of the conference. It was a privilege to hear major proponents of the many-worlds interpretation of quantum theory (Saunders and Wallace) arguing point-by point against the relational view (Rovelli), not to mention pointed interjections from heavyweights in the audience such as John Barrow, Julian Barbour and Joe Silk. During the course of the debate, it struck me that the discussion was in some ways a modern echo of the classic debate between the Heisenberg and Schroedinger interpretations of the quantum world. I could almost see Heisenberg behind Carlo Rovelli’s chair, applauding his emphasis on the discreteness as the key property of the quantum world and his dislike of the wavefunction. In the opposite corner, Schroedinger’s view had much in common with the many-worlds camp because of his dislike of collapsing wavefunctions. Indeed, it has recently been suggested by several authors that Schroedinger’ s later work on quantum interpretation somewhat anticipates the many-worlds view (will dig out references on this).

So a splendid finish to a splendid conference; an important debate on the meaning of quantum theory between leading proponents of alternate modern interpretations of the theory, with echoes of history throughout.

It all happens at Oxford. Strolling past the Sheldonian this evening, I heard the familiar strains of Vivaldi’s Four Seasons. Turns out Nigel Kennedy was giving a concert with the Oxford Philomusica, so I sneaked into the foyer to hear the last few movements. You don’t hear much about Kennedy since he moved to Poland, but his performance was as electric as ever. I timed the applause at over 20 minutes, he certainly hasn’t lost his gift for communicating with the audience. However, the real surprise was the orchestra, it didn’t sound like any college orchestra to me – lovely crisp playing, fantastic articulation in the fast passages, and super pianissimos in the slow passages. Turns out the Oxford Philomusica is a relatively new initiative, a professional orchestra in residence at the university. What a great idea , I’m sure it gives a unique opportunity for the very best of the music students

Nigel Kennedy at the Sheldonian 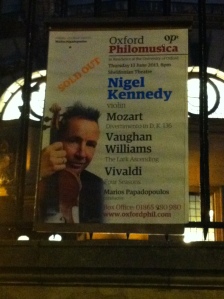 2 responses to “Last day of Quantum Foundations conference at Oxford”