A conference in Paris

This week I’m in Paris, attending a conference in memory of the outstanding British astronomer and theoretician Arthur Stanley Eddington. The conference, which is taking place at the Observatoire de Paris, is designed to celebrate the centenary of Eddington’s famous measurement of the bending of distant starlight by the sun.  a key experiment that offered important early support for Einstein’s general theory of relativity. However, there are talks on lots of different topics, from Eddington’s philosophy of science to his work on the physics of stars, from his work in cosmology to his search for a unified field theory. The conference website and programme is here. 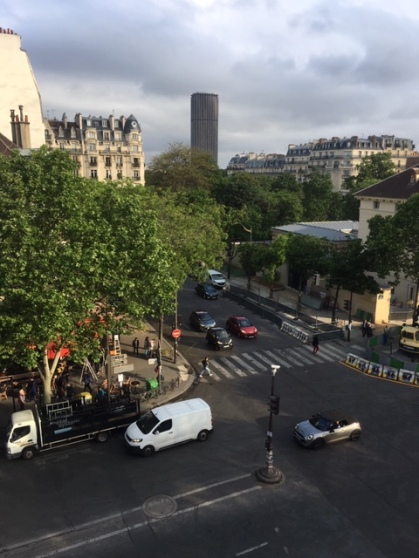 The view from my hotel in Denfert-Rochereau

All of the sessions of the conference were excellent, but today was a particular treat with four outstanding talks on the 1919 expedition. In ‘Eddington, Dyson and the Eclipse of 1919’, Daniel Kennefick of the University of Arkansas gave a superb overview of his recent book on the subject. In ‘The 1919 May 29 Eclipse: On Accuracy and Precision’, David Valls-Gabaud of the Observatoire de Paris gave a forensic analysis of Eddington’s calculations. In ‘The 1919 Eclipse; Were the Results Robust?’ Gerry Gilmore of the University of Cambridge described how recent reconstructions of the expedition measurements gave confidence in the results; and in ‘Chasing Mare’s Nests ; Eddington and the Early Reception of General Relativity among Astronomers’, Jeffrey Crelinsten of the University of Toronto summarized the doubts expressed by major American astronomical groups in the early 1920s, as described in his excellent book.

I won’t describe the other sessions, but just note a few things that made this conference the sort of meeting I like best. All speakers were allocated the same speaking time (30 mins including questions); most speakers were familiar with each other’s work; many speakers spoke on the same topic, giving different perspectives; there was plenty of time for further questions and comments at the end of each day. So a superb conference organised by Florian Laguens of the IPC and David Valls-Gabaud of the Observatoire de Paris. 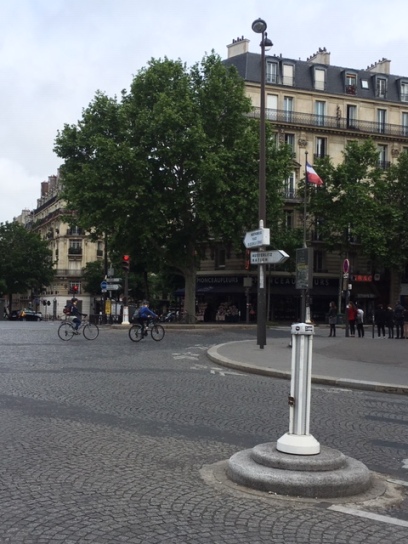 On the way to the conference

In my own case, I gave a talk on Eddington’s role in the discovery of the expanding universe. I have long been puzzled by the fact that Eddington, an outstanding astronomer and strong proponent of the general theory of relativity, paid no attention when his brilliant former student Georges Lemaître suggested that a universe of expanding universe could be derived from general relativity, a phenomenon that could account for the redshifts of the spiral nebulae, the biggest astronomical puzzle of the age. After considering some standard explanations (Lemaître’s status as an early-career researcher, the journal he chose to publish in and the language of the paper), I added two considerations of my own: (i) the theoretical analysis in Lemaître’s 1927 paper would have been very demanding for a 1927 reader and (ii) the astronomical data that Lemaître relied upon were quite preliminary (Lemaître’s calculation of a redshift/distance coefficient for the nebulae relied upon astronomical distances from Hubble that were established using the method of apparent magnitude, a method that was much less reliable than Hubble’s later observations using the method of Cepheid variables). 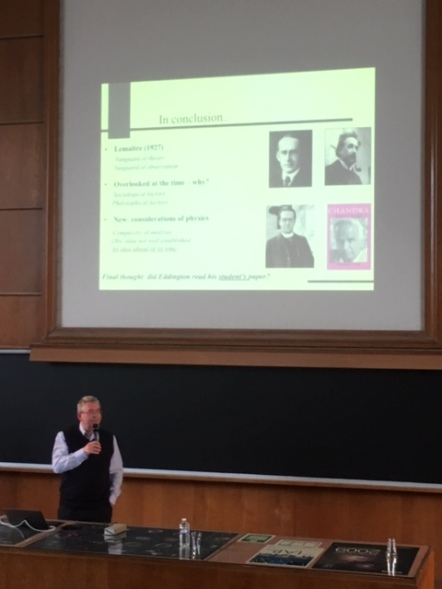 Making my points at the Eddington Conference

It’s an interesting puzzle because it is thought that Lemaitre sent a copy of his paper to Eddington in 1927 – however I finished by admitting that there is a distinct possibility that Eddington simply didn’t take the time to read his former student’s paper. Sometimes the most boring explanation is the right one! The slides for my talk can be found here.

All in all, a superb conference.

Comments Off on A conference in Paris

Filed under Astronomy, Cosmology (general), History and philosophy of science

Tagged as Academia, Astronomy, History and philosophy of science, University