Last weekend saw the third Robert Boyle Summer School, an annual 3-day meeting in Lismore, Co, Waterford in honour of one of Ireland’s greatest scientists. Born in Lismore into an extremely wealthy family, Boyle  became one of the most important figures in the Scientific Revolution,  well-known for his scientific discoveries, his role in the rise of the Royal Society and his influence in promoting the role of the experiment in the ‘new philosophy’. 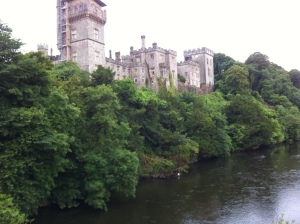 The summer school took place in the Heritage Centre in Lismore, the beautiful town that is the home of Lismore Castle where Boyle was born.  The talks covered a wide range of topics, from Boyle’s scientific legacy to the interplay of science and religion (like many figures of the scientific religion, Boyle was quite devout and extremely interested in the interface between science and religion). See here for the conference program.

This was the third such summer school, organised jointly by the CALMAST science outreach group at Waterford Institute of Technology  and the Lismore Heritage Centre. As the only such event on a major figure in the scientific revolution, it is beginning to attract some of the world’s top experts on this period of science (known as ‘early modern’). This year, the programme included talks by Lawrence Principe (Drew Professor of the Humanities at Johns Hopkins and author of The Scientific Revolution (OUP) and The Aspiring Adept: Robert Boyle and his Alchemical Quest); John Hedley Brooke (Professor Emeritus of Science and Religion and Oxford University , and author of Science and Religion: Some Historical Perspectives and Religious Values and the Rise of Science in Europe); and Terry Eagleton  (author of over forty books and Distinguished Professor of English literature at Lancaster University).

It was the sort of conference I like best – a small number of inter-disciplinary talks aimed at curious academics and the public alike, with lots of time for questions and long breaks for discussion. On the last day, Boyle’s legacy was also celebrated by some talks concerning the science of today; we had a superb lecture on astrophysics from Professor Lorraine Hanlon of University College Dublin, and an outstanding seminar on inflammation and ageing by Professor  Luke O’ Neill, one of Ireland’s best known and most successful biochemists.  Other highlights were a lecture on fraud in modern science by Jim Malone, Emeritus Robert Boyle Professor of medical physics at Trinity College Dublin, and an open-air barbecue in Lismore Castle on Friday evening,including a re-enactment in costume of some famous Boyle experiments by Eoin Gill of WIT. 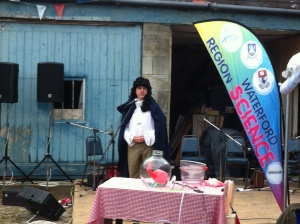 Song and dance in the grounds of Lismore Castle

Tagged as History and philosophy of science, Science and society, universities