Last day at COSMO13 in Cambridge

Today was the last day of the COSMO13 conference, a most enjoyable, if sometimes exhausting conference – so many seminars, not to mention a banquet in Trinity College last night. 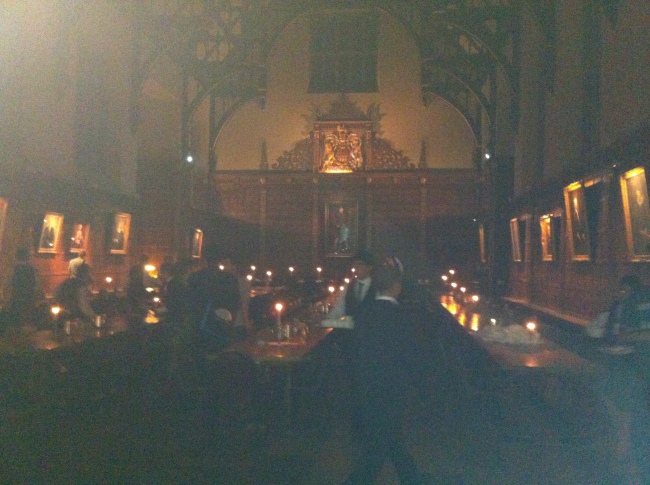 The conference finished this morning with lectures on dark energy from Ofer Lahav and Edmund  Copeland, on dark energy and modified gravity by Lam Hui and Claudia de Rahm, and on inflation by Richard Easther. The conference website is here and videos of the presentations will be available here in the next few days.

UPDATE: Videos of the plenary talks and pdfs of talks from the parallel sessions are  now available here.

If I had to summarize the conference in one sentence, I think the take-home message is that recent experimental results in both cosmology (from the PLANCK satellite) and particle physics (from the LHC) are strongly supportive of our basic models, giving strong confidence that our underlying theories are on the right track. The downside is that in each case, the fit is a teeny bit too good for comfort. There is a slightly worrying lack of evidence for physics beyond the standard models so far – a lack of evidence for supersymmetric particles at the LHC (although a low-mass Higgs is in principle good news for SUSY) and a lack of non-Gaussianities and parity violation in the PLANCK measurements of the cosmic microwave background. But the future is bright, especially considering the projected increases in luminosity at the LHC and the possible detection of B-mode polarization in the CMB by PLANCK.

That said, I agree heartily with Ofer Lahav’s comment that it is extraordinary to be living through a paradigm shift in cosmology, namely the discovery of the accelerated expansion (two paradigm shifts if you include inflation). Added to which we are now in an era of precision cosmology. Indeed, measurements of the cosmic microwave background by PLANCK are now reaching such a level of precision that it isn’t always meaningful to talk about agreement or tension with astrophysical measurements – the latter have quite a lot of catching up to according to George Efstathiou!

On a personal note, it’s extraordinary to see Dad’s work on supersymmetry reaching a whole new audience in cosmology, as supersymmetry breaking in the early universe  becomes a major area of research. I can’t tell you how many young researchers eyed my badge in astonishment and then started to quizz me about O’Raifeartaigh models!

Now the conference has finally ended, it’s nice to get back to work on my paper on Einstein’s cosmology in the 1930s – some of the talks here have given me some new ideas. I managed to finish most of the paper here, I’ll always think of it as my Cambridge paper!

Comments Off on Last day at COSMO13 in Cambridge