I was surprised and delighted by the photograph below, prominently displayed in this week’s Irish Times magazine. In the accompanying article, journalist Arminta Wallace makes the point that the central figure in the photo is recognizable anywhere in the world, and challenges the reader to name the two Irish scientists flanking him (they are identified later in the piece). 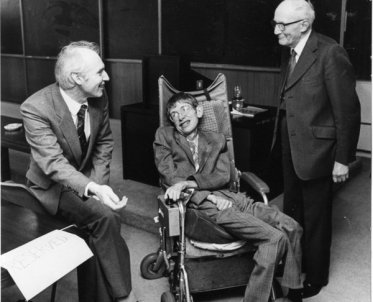 The scientist on Hawking’s right is the Irish physicist Ernest Walton, famous for splitting the atomic nucleus in 1932. The Cockroft-Walton experiment was the first successful accelerator experiment (and the first demonstration of E = mc2) and led to a well-deserved Nobel prize. As the prototype of all ‘atom-smashing’ experiments, Walton’s work is extremely relevant to this week’s discovery of the Higgs boson at the Large Hadron Collider (LHC).

The scientist on the left is my late father, Lochlainn O’Raifeartaigh. A senior professor in the School of Theoretical Physics at the Dublin Institute of Advanced Studies (DIAS), Lochlainn was a well known theorist in the field of elementary particle physics. The photo was taken at a conference at DIAS in 1983. I think it’s quite nice – it is not at all staged and one has the impression that the three physicists are enjoying a rare meeting. One sad aspect of the photo is that, even twenty years ago, there is already a marked deterioration in Hawking’s condition. That said, he has outlived the other scientists in the picture…

What would the trio have discussed? What do a leading particle theorist, a cosmologist and a Nobel experimentalist talk about over coffee? My guess is the newly-minted theory of cosmic inflation might have come up. Inflation is a theory that concerns the behaviour of the entire universe in the first fraction of a second, but it borrows heavily from ideas in particle physics. Hence it represents a convergence of cosmology ( the study of the universe at large) with particle physics (the study of the world of the extremely small). Given that the theory had only recently been posited, it’s highly likely that it was discussed by the trio with some excitement. (Of course Walton was an experimentalist but he had a lifelong interest in theory; it is often forgotten that he had a first class degree in mathematics as well as physics and he attended many conferences at the Institute over the years).

Ms Wallace draws a nice connection between the photo and the upcoming Dublin City of Science Festival. There is also a connection with science’s latest triumph, the discovery of a Higgs-like particle. First, Walton’s pioneering accelerator work laid the foundations for today’s experiments at the LHC (see above). Second,  Lochlainn made several important contributions to a theory now known as ‘supersymmetry’.  Supersymmetry is currently being put to the test at the LHC, as experimenters search for the ‘supersymmetric’ particles predicted by the theory. Thus the work of both Irish physicists remains relevant today.

You can read the Irish Times article here and more on Lochlainn’s work here. By coincidence, Lochlainn’s work will be celebrated at an international conference on theoretical physics in Munich next week.

3 responses to “Hawking, Walton and O’Raifeartaigh”