Faster than the speed of light

So. A respected experimental group, doing respected work, the OPERA neutrino experiment at Grand Sasso in Italy, have reported a startling result; they have measured a velocity for neutrinos that is in excess of the speed of light (a fractional increase of about of 1 in 100,000). The result is getting a huge amount of publicity because it appears to be in conflict with Einstein’s theory of relativity. ‘Einstein wrong‘ always makes headlines. I’m certainly getting a lot of calls and emails on the subject, not least because I had an article on relativity in Thursday’s Irish Times (see here). 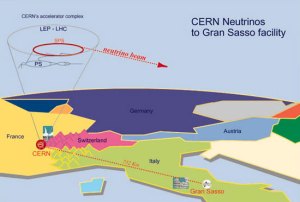 In the OPERA experiment, a beam of neutrinos travels underground from CERN travel to Gran Sasso in Italy

The OPERA paper has been posted on the ArXiv here. Most physicists (including the participants) are calling the result an ‘anomaly’ and expect to find a hidden error, for two reasons

1. Thousands and thousands of experiments on elementary particles suggest that the speed of light represents a natural speed limit for material bodies, no matter how much energy you whack them with

2. There are deep mathematical reasons for believing that the speed of light in vacuum represents an absolute limit, from arguments of symmetry to the principle of least action. Basically, all sorts of mathematics suggests that the speed of photons- massless particles –  is the highest speed achievable. In addition, the principle underlies a great deal of observed physics, far beyond the remit of relativity.

So what is going on?

Science is a skeptical activity and scientists are slow to throw out a successful theory at the first sign of trouble -especially a theory as successful and as central as special relativity. Most scientists adopt a ‘wait and see’ approach when an experiment like this is reported.

For example, we know a great deal more about relativity than we do about neutrinos. It is only a few years since it was discovered that neutrinos have mass, and the phenomenon of neutrino oscillation – the transformation of one type of neutrino to another – is still not well understood. So it is possible that this experiment is an artefact of some unknown neutrino process.

A more prosaic possibility is that there is a systematic error in the extremely precise time/distance measurements necessary for the experiment. For example, the time of flight of the neutrinos is measured using a sophisticated version of GPS – perhaps there is a hitherto undetected error lurking in this method that is affecting the measurement. A few years ago, it was discovered that the moon has an effect on the curvature of the LHC tunnel, as does the TGV arriving at Geneva – these effects only show up because of the unprecedented precision involved in the experiments.

Finally, it is always possible that this result may turn out to be a real effect. In this case, we could be looking at some exciting new physics; not a violation of relativity, but the first evidence of hidden dimensions. String theorists have long mooted the possibility that the three familiar three dimensions of space may be accompanied by other dimensions, tiny ones that are curled up so that they are undetectable at normal energies. In principle, a particle that takes a shortcut through such a dimension could arrive early! This may sound like a rather fantastic explanation, but it is possible that an experiment at the unprecedented energy and precision of OPERA could see this effect for the first time. Certainly, it would not contradict any previous theory or experiment.

So an exciting wait, but my money is on a systematic error in the measurement of distance or time

I keep hearing in the media that ‘relativity forbids travelling at speeds faster than the speed of light in vacuum.’ Actually, it doesn’t, as Einstein was fond of pointing out. Special relativity suggests that it is impossible for  body to be accelerated from subluminal to superluminal speed. Thus particles that travel faster than light are possible in principle so long as they always travel at that speed (known as tachyons). However, such behaviour has implications for time (it would run backwards) and for causality, and is therefore thought unlikely. Also, no such particles have been observed  in five decades of experimentation in particle physics .

Last weekend, I was quoted (well misquoted) in The Irish Times, making the last point above; you can read it here, it’s quite a good article.

If it is a systematic error, what could it be?  Looking at the paper, my own guess is that it is significant that the group do not measure the time-of-flight of individual neutrinos, but massive bunches of the particles. Essentially they measure the beginning and end of a bunch, and apply statistics to get the mean time. A messy enough procedure, considering the accuracy required..

I have a letter on the experiment in The Irish Times today, you can read it here

31 responses to “Faster than the speed of light”