MIT, the LHC and a royal wedding

It’s always a pleasure to pop over to MIT for the afternoon, and on Friday I attended a seminar titled ‘MIT and the World’s Largest Science Experiment: Hunting the Higgs Boson”, given by Markus Klute, Assitant Professor of Physics at MIT and member of the CMS (compact muon solenoid) collaboration at CERN. It seems MIT has quite a big involvement with the LHC, with a large group working at the CMS detector and a smaller group at ATLAS; about 40 researchers overall. 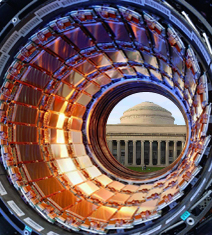 MIT and the World’s Largest Experiment: Hunting the Higgs Boson

The talk was aimed at a wide audience, and much of it was a fairly standard introduction to particle physics and the experiments at the Large Hadron Collider. I always try and attend such talks whenever I can, partly to pick up any new information but also to see how the real players present the story.

Starting with a review of the nucleus and its particles, Markus gave a succinct overview of the Standard Model. I liked the way he linked the theory to today’s news; in describing the way particles are believed acquire mass (the Higgs mechanism), he invited the audience to imagine Charles and Kate entering the auditorium, how people would interact (i.e. cluster around them) to different degrees, thus acquiring different masses. This is a nice twist to a common analogy and it never hurts to connect with current events. (Being Irish, I’d be a neutrino with almost zero interaction, though I wish the couple well).

Professor Klute then gave a nice overview of the four main detectors at the LHC, and then some details about his group’s contribution to the CMS experiment, particularly in the area of building the tracking system. I won’t repeat the details but you can find a good review of US involvement at the CMS detector here. I particularly enjoyed the emphasis on the ‘rediscovery’ of the particles of the Standard Model at CMS, beautifully summarized in the plot below. I think particle physicists should emphasize this chart more, it gives great confidence in the methods of particle physics (and shows how sociologists such as Shapin and Schaffer underestimate the reproducibility of big science experiments, see ‘Leviathan and the Air Pump’). 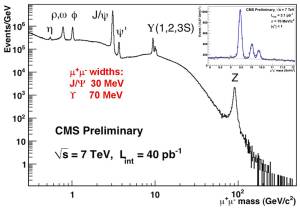 I liked the speaker’s simple description of particle detectors: a camera with a hundred million pixels and a shutter speed of 400 million times per second – not to mention the filtering. He also placed great emphasis on the computing challenges thrown up by the data, giving a nice overview of the Worldwide LHC Computing Grid. I also liked the way he described particle physics experiments  in terms of four components: accelerators, detectors,  computing and people!

Finally, there was a nice overview of the challenge of the hunt for the Higgs, explaining that

– it is rarely produced

– its mass is not known, hence neither are the main production or decay channels

Professor Klute then gave a very quick review of the main production and decay channels for the Higgs and explained how CMS will look for them.

Higgs production via gluon fusion; a dominant process for a range of mass 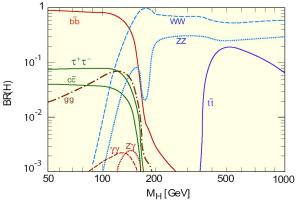 The decay channel depends on the Higgs mass

Another nice plot was a summary slide showing the masses already ruled out by previous accelerator experiments.

The window is closing

All in all, a very enjoyable LHC talk with a useful description of US participation in the project. If you want to more about this, the US LHC blog is well worth following.

Markus points out I said Charles and Kate instead of William! This is such a whopping error (of planetary magnitude) I think I’ll leave it. Re Higgs production and decay channels, there is an really nice overview here by a group at Imperial College also involved with the CMS experiment. This week there was a big meeting at Notre Dame concerning US participants in the CMS experiment, you can link to it here

8 responses to “MIT, the LHC and a royal wedding”