A typical day at Harvard

What’s a typical day at Harvard like? A good few people have asked me this. Truth is, I have no idea; but my own working day here is pretty busy.

I usually start the day online in my apartment; Boston  is five hours behind Ireland (actually four this week because European clocks went back last weekend), so it makes sense to deal with email/college issues at home immediately after breakfast. This little job has an annoying habit of taking up a lot more time than it should (what is it with email nowadays?) and this morning was no exception.

Turns out a book review I recently sent off to Physics World Magazine missed the agreed deadline because of problems with my email server. Marvellous. That took a while to sort out, as did the usual list of college administrative tasks. In particular I’m currently trying to organise a physics class I will give to WIT students from Harvard by videolink – an interesting technological challenge but of course I forgot about the hour change when booking a conference room!

Then it’s a 10 minute walk along beautiful leafy Harvard St to the Kennedy School, for the weekly seminar of our Science and Technology Studies circle. These talks are an important part of the STS activity at Harvard and there is always plenty of serious discussion afterwards. Today, Allison MacFarlane of George Mason University gave a talk on nuclear power; ‘A Free for All? Impacts of Emerging Nuclear Countries’ was a talk on the thorny issue of the acquisition of nuclear energy by countries not currently in the nuclear club. The talk focused on the reasons why such countries desire nuclear power (energy economics, energy security, prestige etc) and the issues perceived by current members of the club (reactor safety, waste disposal, weapons proliferation). One big surprise was the number of countries declaring an interest; the speaker concentrated on the case of Jordan, Indonesia, Turkey, Iran and the UAE  but there were many many more….I had no idea.

After the talk,  it was straight into our weekly Science, Power, and Politics reading group for STS fellows. This continued our review of science, citizenship and democracy.  For this discussion we had studied papers such as ‘A Question of Europe‘ by S. Jasanoff (in Designs on Nature:  Science and Democracy in Europe and the United States ) and ‘Science and the Political Imagination in Contemporary Democracies‘ by Y. Ezrahi, (in States of Knowledge, Jasanoff, ed.); the  two-hour discussion focused on science and democracy, in particular science policy and citizenship in the context of the  European Union. If you think physics is difficult, you should try this stuff.. 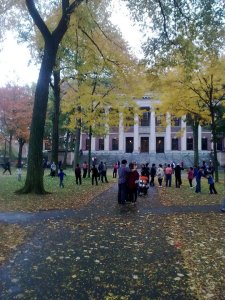 A run across the quad

After this session, I had to run – literally – from the Kennedy School up to the Harvard Physics Department on the main campus for a talk on astrophysics.  How did the first stars and black holes form? was an excellent talk by Avi Loeb on the formation of the earliest stars and galaxies. The lecturer presented a masterly overview of current theoretical work in computer modelling of  galaxy and black hole formation,  the fit between theory and experiment for the case of the spectrum of cosmic hydrogen, and the importance of data from the next generation of large telescopes.  If you want to more on this subject, go and buy his book.

I particularly admired the way the speaker carefully described the assumptions underlining the simulations i.e. the basic assumptions of the Lambda CDM model used ( see here for the basics of this model). Theoreticians often have to make assumptions for their models, which is perfectly ok as as long as one doesn’t lose sight of the assumptions being made!  One oddity: in his opening remarks, Loeb made a few cracks about the speculative nature of string theory; I was quite surprised, given Harvard’s strong reputation in this area. Indeed, noted string theorist Lisa Randall was in the audience, among others, but no-one seemed to take offence – perhaps they are all concerned that too many young theorists are heading in this direction.

It is 6 pm by the time I get back to the office and the day’s work just starting. Tomorrow morning, we have our Science and Technology Studies fellow’s meeting, where STS fellows take turns to present their work to each other for discussion in closed session.  In the afternoon, there is  a talk on dark matter in MIT by Paul Schechter I’m really looking forward to. How does anybody get any work done in this place?

P.S. On second thoughts I’m too tired for serious work. I”ll go and fool around on the web in Lamont – my favourite library whose restaurant is open 24 hours ! 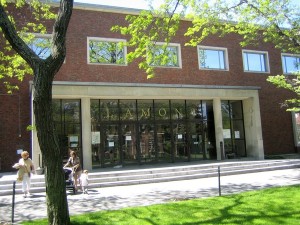 Filed under Science and society, Travel

2 responses to “A typical day at Harvard”