Einstein, de Valera and the Institutes for Advanced Study

Is there a collective noun for a roomful of professors? A great many of the most senior figures of Irish academia turned up in Trinity College Dublin on Saturday night to hear the annual statutory lecture of the School of Theoretical Physics of the Dublin Institute of Advanced Studies.

The lecture, titled “No excuses in paradise: the past, present and future of the institutes for advanced studies” (see poster here) was a fascinating talk on the history and purpose of the Institutes for Advanced Study at Princeton, Dublin, Paris and elsewhere. It was given by Professor Peter Goddard, the current director of the famous Institute for Advanced Study at Princeton in the US. This institute, one of the most prestigious research centres in the world, has hosted staff such as Einstein, Godel, Oppenheimer, Freeman Dyson and Ed Witten and became the prototype for similar institutes around the world. Peter Goddard himself is extremely well-known as one of the early pioneers of string theory.

The  speaker started by tracing the initial idea by the American educationalist Abraham Flexner in the 1920s to seek funding for an Institute of Advanced Study in the US that could compete with research centres in Germany such as that in Gottingen. The plan was to create an elite American ‘graduate university’ –  a university that did not teach at undergraduate level but focused on research and on the training of researchers. Of course such an institute could only be staffed by the best of the best, and Einstein, already a world figure in science, was approached on one of his periodic visits to Caltech. Worried about the rise of the Nazis, Einstein quickly agreed. You can read more about this story here, but Prof Goddard showed a wonderful slide showing the famous issue of the New York Times with the headline: ‘Einstein to set up new school’. 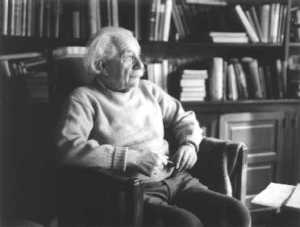 Einstein in his office at IAS

The speaker then explained how during the war the Irish premier Eamon de Valera, a former mathematician, decided a similar institute would be of benefit in Ireland. Due to economic constraints, it was settled that the institute would deal with theoretical physics (as there were great advances being made in this field and it required no expensive equipment) and with Celtic studies (also not very expensive and of national interest). On the advice of Einstein, de Valera approached Schroedinger, the father of wave mechanics, to persuade him to come to Ireland to direct the institute.

This part of the story was well-known to an Irish audience but the speaker gave a very nice sketch of the history – Schroedinger did come in 1940 and spent many years at the Dublin IAS, followed by other prestigious theoreticians such as Heitler, Lanzcos and Synge. The institute became a great success internationally, attracting regular visits by famous physicists such as Paul Dirac. Indeed, some nice slides concerning Dirac’s visits were shown, not least a menu demonstrating the attraction of Ireland during wartime. Another slide showed a comment by Dirac, expressing surprise that the Irish Prime Minister had time to sit through a whole mathematics conference! All in all, it was a lovely overview of the history of the Dublin IAS and included a nice reference to Lochlainn’s work (it turns out Goddard collaborated quite a bit with Lochlainn in the early days of supersymmetry) . 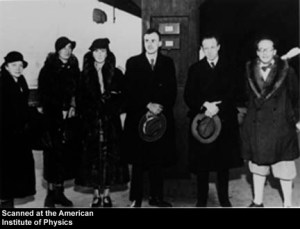 The speaker then explained how the American idea was imported back to continental Europe, notably at IHES in Bures-sur-Yvette just outside Paris (set up in 1958). This institute is also highly regarded in the world of academia, thanks to the work of mathematicians such as Alain Connes and the late Louis Michel. There are also informal links between the institutes – many of the professors in the audience had spent time at more than one (in my own family we have fond memories of years spent at both the Princeton and Paris institutes as well as Dublin).

The lecture finished with a brief discussion of the role of such research institutes. In a world dominated by the technological application of science, it is sometimes hard to persuade people of the importance of enquiry for it’s own sake – ‘the usefulness of useless knowledge’. Of course, one answer to this is that we don’t know which part of scientific enquiry will prove technologically useful (look at Boolean algebra or the development of the web at CERN). However, a deeper answer is that knowledge and the pursuit of knowledge will always be important for their own sake. The professor summed up with the best quote of the night: ‘the thing about a scholar’s paradise is that there are no excuses for failing to do something important!’

So have the institutes been a success overall and should they continue? As a student, I often heard certain university staff mutter darkly that precious little work went on there – however such comments rarely came from staff at the highest levels. It’s worth noting that Saturday’s speaker was introduced by Professor Samson Shatashvili, the well-known string theorist who directs the Hamilton Mathematics Institute , a research institute that functions within Trinity College. Prof Goddard didn’t compare the role of such institutes with the institutes for advanced study directly, but I think his historical account demonstrated that the latter still have an important role to play. As regards the Dublin IAS, I should have said that the lecture above took place in the middle of a conference to celebrate the 60th birthday of Professor Werner Nahm, a noted theorist at the Dublin IAS. A measure of the stature of Werner, and of the continuing prestige of DIAS, can be seen from the list of speakers in the conference program here. Another indication of the continuing success of DIAS was the preponderance of well-known international figures on Saturday night such as Shatashvili, Nahm, Goddard and Frohlich – not to mention the mathematician Micheal Atiyah and a quiet man in the back row who I later realised was Peter Higgs (yes, he of the elusive boson). 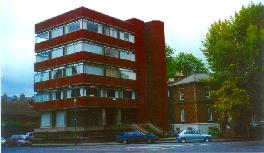 The school of theoretical physics (DIAS) on Burlington  Road

Filed under History and philosophy of science, Public lectures

2 responses to “Einstein, de Valera and the Institutes for Advanced Study”