Today was evolution day at the Faraday summer school (see posts below), with a number of fascinating talks on the theory of evolution.

First up was Professor Stephen Freeland of the University of Maryland. An interesting aspect of Stephen’s talk was that it was delivered in realtime (by Skype) from Hawaii! With his slides projected on the conference screen and his voice and image on a nearby computer, one quickly forgot he was not actually in the room.

Stephen’s first talk was a super overview of the modern status of the theory of evolution by natural selection, explaining how advances in microbiology and genetics have strengthened and deepened the theory. One interesting aspect of this talk was Stephen’s belief in the fallacy of human supremacy: he sees humans as far from the top of the chain of life,  as often depicted. Indeed, he showed that a great deal of the common portrayal of man at the pinnacle of the evolutionary tree really arises from pre-Darwinian theory! 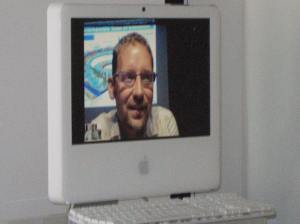 Stephen also gave a talk on astrobiology, the study of life on other planets. Much of astrobiology is concerned with the study of the emergence of life in the earliest years of earth, but there was a fascinating overview of the factors need for life elsewhere. I particularly enjoyed his discussion of attempts to quantify the Drake equation, an equation that attempts to describe the probability of there being intelligent life on other planets (more on this later). 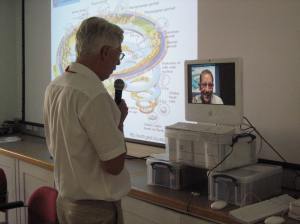 Next up was a fascinating talk by Simon Conway Morris on ‘Evolution and the Inevitability of Man’. This was a superb overview of the theory of convergence in evolution, a theory Simon has pioneered. Essentially, it concerns the fact that many complex organs such as the camera eye have evolved not once, but several times. Simon went on to explain why he evolutionary convergence may render the emergence of intelligent life not just likely but inevitable, and sees the evolution of intelligent life as an ultimate and inevitable result of the process, in marked contrast with the previous speaker. 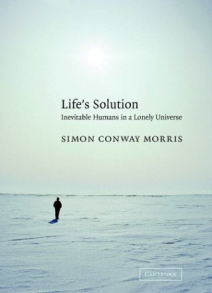 This was followed by a superb talk by Keith Fox, Professor of Biochemistry at Southampton University on ‘Creation and Evolution’. Essentially, Professor Fox gave a detailed exposure of scientific flaws in young earth creationism, and in intelligent design. He finished with a description of theistic evolution. In a way, this talk was the most archetypal of the week – a careful rebuttal of the literal positions of fundamentalists by a highly educated scientist and theologian.

The final talk of the day was a salutary lesson in biblical studies by Dr Ernest Lucas. Dr Lucas gave an outline of the challenge for interpreters of any text: when does one need a literal interpretation and when does one need a figurative one?  These are normally decided on factors such as

What kind of language is used in the text?

What kind of literature?

What kind of audience?

What is the purpose of the text?

There followed a detailed discussion of the interpretation of the Book of Genesis, with Dr Lucas concluding that a figurative rather than literal interpretation is clearly called for.  Again, this was a strong attack on fundamentalism by a renowned theologian, absolutely fascinating.

The day finished with a planary question-and-answer session chaired by Dr Denis Alexander, with Stephen participating by Skype link. Again, I was astonished how well it worked. 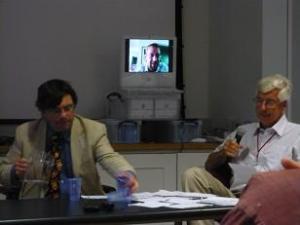 4 responses to “Evolution at Cambridge”