Science, philosophy and religion at Cambridge

I’m spending this week in St Edmund’s College of the University of Cambridge, attending the Faraday Institute summer school on science, philosophy and religion. So far, the course is a feast in the history and philosophy of science, just as last year (see posts on last year’s summer school in July 2008 section).

This morning started with an excellent talk on ‘The Reception of Darwinism’ by renowned historian Prof John Hedley Brooke that posed three main questions. What shifts in attitude resulted from Darwin’s work? What information exists to add to conventional accounts of debates such as the Huxley-Wilberforce debate? Does it make sense to say that Darwin’s theory led to the death of God? I won’t attempt to summarize the talk here, but a video of it will be available on the Faraday website in a few days.

Next we had a talk on ‘Rationality in Science and Religion’ by Roger Trigg, followed by a talk on ‘Islam and Science Yesterday’ by Prof Nidhal Guessom of the University of Sharjah, UAE. Roger’s talk was a highly appropriate for the first day, setting the stage with definitions of concepts such as realism, materialism, relativism, naturalistic methodology etc. Nidahl’s talk was a fascinating account of the history of Islamic science, not merely as curators of Greek classicism but as innovative scientists – accompanied by a careful discussion of the reasons for the gradual decline of Islamic science.

For me, the tour- de-force of the day was a fantastic talk on the history of mediaeval science by the Oxford historian Allan Chapman: ‘Mediaeval cosmology and the Church’. Essentially, Chapman’ s thesis was that the ‘Dark Ages’ is a misnomer, created by a revisionist Protestant view of Catholic science in the middle ages (‘those dark and monkish times’ – Hooke). Chapman made his case by giving a superb overview of science from 600 AD to 1400, describing the advances made from optics to astronomy, and the contributions of figures such as William of Ockham, d’Oresmene,  Nicholas of Cusa and Bernhardt Walther.

Of course, this thesis leads to an obvious question – if the Dark Ages were not so dark, why did it take so long for the heliocentric model to emerge? (my question). Chapman had a great answer – because no-one suspected the Ptolemy model was wrong! After all, most of the predictions of Ptolemny’s geocentric model were more or less accurate!!

I love this theme, and I’m sure it’s typical in science. The most difficult scientific theories to refute are those that are almost correct -or make predictions that re almost correct – simply because no-one suspects they need fixing! True from the limits of Newton’s gravity to the discovery of the elctroweak interaction!. Thought for the day…

Al in all, a super first day. As usual, each talk is a superb example of how to communicate science. After each talk, there is 30 mins of Q&A after every talk, leading to great discussions. After tea, there is a plenary panel discussion, with questions raised during the day discussed. 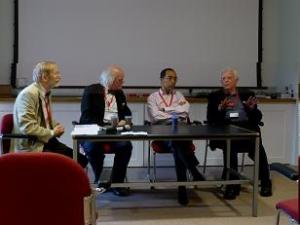 Comments Off on Science, philosophy and religion at Cambridge